Why Saudi Arabia has given its topmost award to Mr. Narendra Modi? 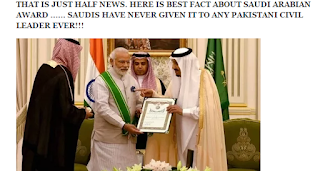 2. He is fourth Indian Prime Minister to visit Saudi Arabia after Manmohan Singh in 2010, Indira Gandhi in 1982 and Jawaharlal Nehru in 1956.
3. SAUDIS HAVE NOT GIVEN THIS AWARD TO EVEN MR JAWAHAR LAL NEHRU WHO IS CONSIDERED ARCHITECT OF INDIAN FOREIGN POLICY.
4. AND INDIAN MEDIA HAS MISSED THIS PROUD MOVEMENT AGAIN DUE TO THEIR IGNORANCE.

SO WHY PM MODI GOT IT HERE ARE REASONS

7. PM Modi has stands for what he says and he completes it. He has reversed Indian Policy of DIPLOMATIC LIP SERVICE he has sent ARMED FORCES IN HARMS WAY TO SHOW HIS COMMITMENT TO ALLIES. Pakistani Media crying and praising PM Modi for UAE visit and SENDING IN INDIAN AIR FORCE IN SAUDI ARABIA. This was first time in history IAF jets touched Saudi soil all credit to PM Modi.
8. HIDDEN DIPLOMACY of PM Modi paid off he started lot of meeting with saudies away from media glare like this on 16 December 2014 in Brisbain. There contents are unknown or sketchy at best but now you see the result.