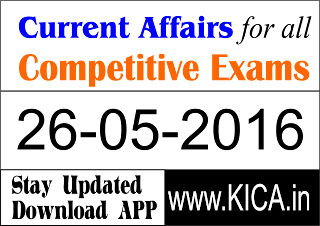 Three islands shut down to save coral reef in Thailand
BANGKOK: Three islands off Phuket in south Thailand were closed to tourists to protect endangered coral reefs, Thai Marine officials said on Wednesday.
The tiny islands off Phuket's east coast, namely Koh Khai Nai, Khai Nok and Khai Nui, were shut down with all facilities and structures used for tourist activities
Read more »

Bharatavani Becomes the Largest Online Repository of Dictionaries in India on its Very First Day
The Union HRD Minister, Smt Smriti Zubin Iani launched the multilingual knowledge portal www.bharatvani.in  at Lucknow today. While launching the app the Minister said that under the Prime Minister Shri Modi’s Digital India Mission, Bharatavani App will perform the task of bringing about digital revolution in the county. The Government’s mission is to showcase the Indian culture and heritage to the world through the medium of technology.
Read more »

India fifth largest producer of e-waste: Study
India, which has emerged as the world’s second largest mobile market, is also the fifth largest producer of e-waste, discarding roughly 18.5 lakh tonnes of electronic waste each year, a study says.
Telecom equipment alone accounts for 12 per cent of the e-waste, a joint study by Assocham-KPMG said.
Matter of concern
Read more »

Porcine prize
LONDON (AP) — Satires set in financial-crisis Ireland and the high-end art world share this year's Bollinger Everyman Wodehouse Prize for comic fiction, whose rewards include a bottle of champagne and a pig.
Paul Murray's "The Mark of the Void" and Hannah Rothschild's "The Improbability of Love" were named the award's first joint winners on Wednesday.
Read more »

SC allows Italian marine to go home
The Supreme Court on Thursday allowed Salvatore Girone, one of the two Italian marines accused of killing two fishermen off Kerala, to return to Italy, as the Centre didn't object to it.
The other co-accused in the case, Massimiliano Latorre, is already in Italy after being allowed by the Supreme Court in September 2014 to return to recuperate from a stroke. Recently, the court extended
Read more »

RBI To Award Prize To Authors Of Original Hindi Writing In Banking, Economics And Finance
There’s A Serious Dearth Of Original Hindi Writing In The Fields Of Banking And Finance, And Reserve Bank Of India Governor Raghuram Rajan Wants To Change That By Handing Out Handsome Cash Rewards To As Many As Three Academics Who Are Up To The JobIn a statement, RBI said it will award three new cash prizes worth ₹1.25 lakh each to promote “excellent writing in the field of banking in Hindi.” RBI will release further details, such as whether the awards will be handed out annually, later.
Read more »
Posted by Shamiratan G Sah